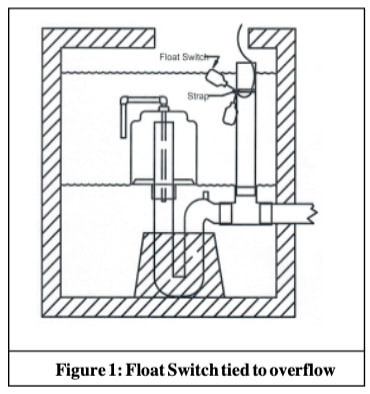 The Fluid Dynamic Siphons’ low voltage siphon counter uses a Trumeter 6300 counter to register the number of times the siphon doses. The counter is mounter in a Rain-tight NEMA 4X enclosure. A float switch is mounted in the siphon dosing tank. When the water reaches the high water line, the contacts in the switch are closed and the counter increments one count. As the water level is drawn down the contacts on the float switch are opened, enabling the counter to count the next cycle.

The counter may be placed at the dosing tank or at a remote site. The battery in the counter will last approximately 10 years before the counter needs to be replaced.

Installation of the Counter
The float switch may be attached to the overflow pipe or to the inside wall of the siphon dosing tank. Please refer to figure 1. The contacts close when the float is approximately 20 degrees above horizontal. The counter may be placed at the dosing tank or at a remote site located within a reasonable distance. If the counter is mounted in the tank or outdoors, it should be placed in a weather proof enclosure. The location of the counter should be influenced by the expected temperature range of the environment. The operating temperature range of the Trumeter counter is -20 deg. C to 60 deg. C or -4 deg. F to 140 deg. F. 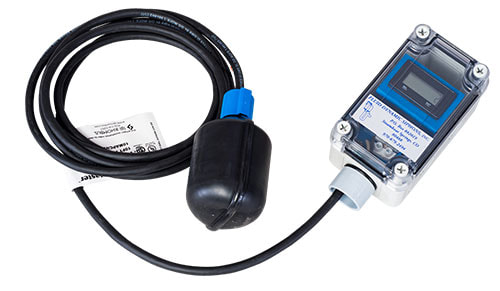 Figure 2 - Siphon Cycle Counter
​The float switch has a 10 foot lead. Additional wire may be spliced in to allow the counter to be in a remote location. 18 gauge wire is sufficient. The voltage and current carried by the wires is so low it is difficult to detect. The counter merely detects the closing and opening of the switch contacts. Connect the two sensor wires to the terminals in the counter box. To disable the reset function of the counter, set dip switch #3 to off. It may be necessary to remove the counter from the bracket to access the dip switches.

The battery is not replaceable, but has a ten year life. At the end of it's life, a new counter will need to be installed into the enclosure.